Garry Stewart’s Objekt was scheduled for its mainstage Adelaide debut in June 2020, but the Covid pandemic led to the season being cancelled. Originally created as a commission for tanzmainz, the resident contemporary dance company of Staatstheater Mainz, Germany, in 2016, it has actually been shown in Adelaide before: ADT mounted a version with the participation of Adelaide College of the Arts students that same year and presented it again as a once-off studio showing last year when the company was just emerging from lockdown. But this season marks the first fully professional staging of the work in its entirety in a major theatre, with the nine ADT dancers joined by company alumnus Lina Limosani and independent dancer Sam Hall. Stewart is credited with the conception, direction and set design of the work, aided by Johanna Milz as dramaturg and with a score by long-time collaborator Brendan Woithe.

Curtain rise reveals a large cube, set at an angle, and bathed in purplish light. Suspense builds as Woithe’s pulsing score surges, until finally several pairs of gloved hands emerge out of one of the edges of the cube, moving up and down as if in dialogue, and eventually splitting the sides of the cube open. Dancers emerge, clad in hooded body suits decorated with small triangles reminiscent of convict uniforms. Their eyes are downcast, and their faces obscured as they move mechanically toward the latticed inner walls of the cube, where they stand motionless. A jerky duet of fast-paced upper body movement ensues, followed by an ensemble piece in which the dancers aggregate into a machine, working in robotic unison. Their dehumanization seems to shift somewhat with the introduction of ropes in a slightly playful interlude. But this is short-lived, for they soon resume their places against the walls of the cube where, with the help of Chris Petridis’s ingenious lighting and projections, they become part of a motherboard.

Shedding their outer clothing, these humanoid creatures become bodies on display in a balletic section of machine-like pas de bourrées, rond de jambes and tendues; as if to hammer home the point, a hinged door opens to reveal a cabinet of three rotating dancers in flesh-coloured costumes. Another version of objectification is presented in a long section in which the dancers, now dressed in short red and pink leather tunics, manipulate a series of props: large L-shaped forms with which they frame and enclose each other, and plinths on which they are rendered as faceless mannequins, manipulated passively by others. Ropes now become instruments of degradation and torture, as bodies are hogtied and dragged about violently. Insectoid forms are created by dancers being strapped upside down on each-others’ backs, their multiple arms and legs agitated and flailing.

While there are gentler interludes, for the most part the vision is dystopian, as humans find ever more ingenious ways to manipulate each other. Three dancers swirling red flags in the air create a rare moment of beauty, but this soon degenerates into political nightmare as a dictatorial figure on a plinth takes control, striking heroic poses while controlling the masses. Brutal fight scenes are juxtaposed with glimpses of an alternate green world behind a flap. The work ends with a single figure sitting entranced by this greenery, reminiscent of the Romantic turn to nature inspired by the commodification and exploitation of human beings during the Industrial Revolution.

Objekt is vintage Stewart: an inventive, brutal and unforgiving take on what we mistakenly call the "inhumanity" of the human race, with its propensity to objectify and exploit the other. Of all his works, it is most reminiscent of the nightmarish vision of The Age of Unbeauty, while also presaging the on-going investigation of the relation between humans and nature in his recent Nature series. It is a fitting inclusion in Stewart’s last year at the helm of ADT.

Pictured are the ADT ensemble performing 'Objekt'. All photos are by Sam Roberts.

Stay connected! Sign up to our e-news here. It's free! 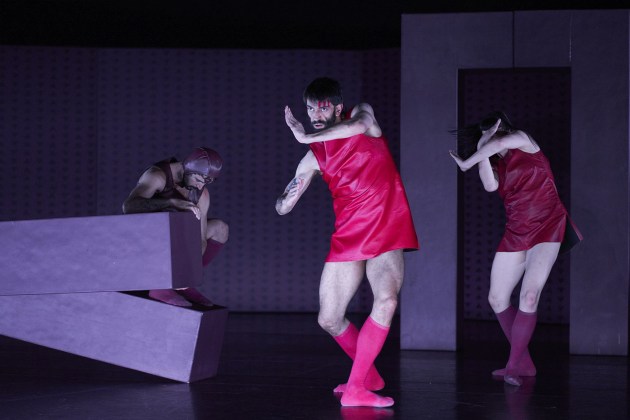