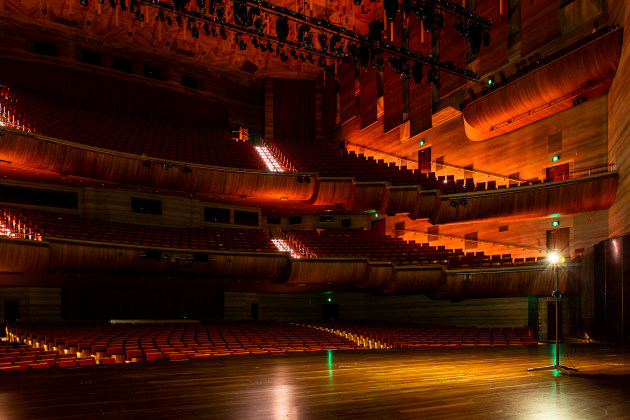 How would you feel if you had to wear a mask to the theatre? If you had to stand in long, bollarded queues to get through the doors, sanitise your hands and have your temperature checked on the way in and had to sit apart from your friends? If ushers wore hi-viz vests and cleaners were evident everywhere? If you couldn’t treat yourself to a glass of champagne? It doesn’t sound like a very glamorous or atmospheric experience, does it?

Such might be the conditions, however, of being in a large theatre audience while the coronavirus remains at large.

Each state in Australia is at different stages of controlling the virus and each has its own protocols for compliance. In Western Australia, for example, the West Australian Ballet (WAB) expects to be able to hold its season of Dracula in September at His Majesty’s Theatre, which seats 1263, with no compulsory restrictions in place. On the other hand, the current resurgence of the virus in Victoria, as in other places around the world, shows that extreme caution will still be required until a vaccine is found.

That means events involving large gatherings of people, like large concerts and theatre shows, will have to change the way they operate if they are to happen at all. As says Richard Evans, the President of Live Performance Australia (LPA), “assuming we don’t want to just shut everything until a future point where there is no community transmission or there’s a vaccine, we need to acknowledge that there will be a risk and we all need to do what we can to mitigate that risk.”

LPA represents and supports performing arts presenters, venues and creators and is developing risk-management industry guidelines. It has taken into account a number of examples, including the Phantom of the Opera production in South Korea. There, remarkably, the 126 member cast continued to play in a 1600-seat theatre throughout the pandemic (apart from a mandatory three week closure).

So what can be learnt from that example? Audience members were sprayed with a light mist of disinfectant before entering the theatre. Each person’s temperature was taken, they had to fill out a questionnaire, sanitise their hands and wear masks. There was also high public confidence in the government’s management of the pandemic, thanks to a highly effective contact tracing regime. Social distancing measures were not applied (though the front row was removed to create a wider distance between the audience and the stage). According to Evans, “there is a broad view that sitting in a theatre, facing forward with a mask on, is not super risky, as we’ve seen in aeroplanes, for example. People are more nervous about standing up and walking around, dancing, spilling drinks over each other, that sort of thing.”

In Perth, the WAB’s first live performance was held while the state was in Phase 3 of restrictions, when 1.5m distancing was still required (front, back and sides of seats). The company presented a performance workshop, CoVid Lab, and was able to fit 40 in the West Australian Ballet Centre. Audiences members were temperature checked, questioned upon entry about their health and for contact tracing, provided with hand sanitiser and optional face masks. No food or beverages were served and there were no printed tickets (just names checked off a list).

By August, under Phase 4, the company could host an audience of 132 at the West Australian Ballet Centre and the protocols above weren’t required. August 15 is the expected date that WA will move to Phase 5, with no restrictions on movement other than its hard border. The company hopes to have a full theatre.

It is the large venues, like Arts Centre Melbourne (ACM), which have the greatest challenge. ACM has three theatres within the one complex (seating a total of 3260), several foyers and bars, a box office, deep stairwells and narrow escalators. The 2500 seat Hamer Hall and the outdoor Sidney Myer Music Bowl also come under its umbrella.

CEO Claire Spencer says all the standard theatre traditions and conventions will have to be looked at through new eyes, “through a health and safety lens”. Her team is considering ideas such as staggered opening times, marking floors to indicate spacing, one way entries and exits, and audiences entering and leaving theatres one row at a time, like on an aeroplane, she says, “loading and unloading by row numbers”. We can expect “covid marshalls” checking that protocols are being carried out correctly and managing queues. Cloaking services, ticket handling and toilets all present problems.

She points out, also, that bringing back the audience depends not just on establishing a safe environment, but also on being seen to be safe. Large numbers of patrons will not return if they are fearful. Theatres will need to overcome their audience’s -- and staff’s -- understandable fear of mixing in large crowds. ACM has been conducting three-monthly surveys to ascertain audience confidence in returning to the theatre. “What’s clear is that they are keen to return when it's safe to do so,” she says. “Interestingly, the last survey carried out in May indicated that having to wear masks would actually discourage rather than encourage them”. (That said she agrees, attitudes to mask-wearing may well have changed since then.) In addition, she says front-of-house staff such as ushers have indicated their nervousness at guiding crowds and handling tickets.

These complexities are duplicated back stage and on stage, with rabbit warren corridors, crowded dressingrooms and limited wing space, not to mention the sweat and breath and physical contact on stage.

Both Evans and Spencer point out that while such measures can be implemented, the problem for large venues and large productions is the cost, particularly in regard to social distancing.

“One of the key issues is – it’s all very well to put these protocols in place – but are people going to be able to afford to put the shows on?” Evans asks. “Who is absorbing the costs; how is this going to be managed? The reality is, for most venues, opening with social distancing is not going to be commercially viable.” Unless theatres are 100 per cent full, or have some kind of financial assistance, large productions such as the Australian Ballet or commercial musicals will be too expensive to stage.

Next: How are we going to afford Covid-safe theatre?