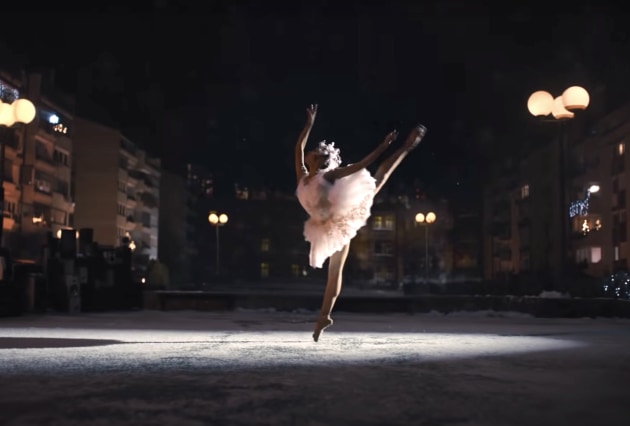 Here's something new for Dance Australia to publish about: Amazon’s global Christmas commercial. The ad shows a ballet dancer’s daydream. Its aim is to show the determination of a highly trained dancer while also sending a message of hope for the arts and capturing the community spirit which, its creators say, is guiding the world through this crisis.

The commercial has a classic plot, the kind you see in so many blockbusters. It runs from opportunity through adversity to triumph. As a metaphor, it’s a story that every dancer has experienced in some form, at some point in their life. It follows a young dancer who won the lead role in her end of year performance only to have Covid’s lockdown rules intervene. She continues to train wherever she can – even outdoors in the rain. Then the performance is shut down. Her little sister, though, makes sure the dancer will have her chance to star.

The dancer is played by French ballet dancer, Taïs Vinolo. Vinolo grew up in the French countryside and now splits her time between Los Angeles and New York City where she attends the Jacqueline Kennedy Onassis (JKO) School.

The choreography is by dancer and choreographer, M.J. Harper, whose edgy personal style has helped him to stand out in both the international dance and social worlds. He told Vogue magazine in an interview last year, “I know that I can’t be pinned down. I reject the idea of a box, because whether it has to do with race, colour, sex, politics, economics—any of that—it’s a box. We don’t exist in a cube.”

He describes his dance style as “cerebral, fleshy, sinewy or sinuous, sexual, languid, and erratic”.

Harper was born in Jamaica and lived in Florida in the US from the age of 7, dreaming of a career in musical theatre. His mother, though, signed him up for a BA in dance at the New World School of Arts in Miami, where he received grounding in classical dance techniques, musical theory and composition during its four-year course. Immediately after graduation, Harper moved to New York to work with the Alvin Ailey II dance company before moving to London to join Wayne McGregor's dance company, where stayed for five years. He now lives in Berlin.

The costumes in the film were designed and created specifically for the advert by Matthew Joseph and Ed Marler.