A lifetime of love and passion

The Shirlene School of Classical Ballet in Pascoe Vale, Victoria is celebrating its 60th anniversary this year. Established in 1960, the school has played an important role in the lives of many generations of dancers.  Below is the article on the school published in the Feb/Mar issue, 2019, of Dance Australia.

When a young Shirlene Jones-Griffin started her first ballet school in 1960 in a scout hall in Pascoe Vale, Melbourne, no one could have predicted the outstanding contribution she would make to the dance world. What started as a small school of 33 students has, over the years, made an impact on the lives of thousands of dancers and left an indelible mark on the local community and the dance world at large.

Jones-Griffin says that starting the school was an extension of her love of dance from her performing days. Back then there was not much money about and starting the school was not easy. Her family couldn’t even afford to pay for her dance classes when she was a girl, but eventually she wore her mother down. When it came to opening her own school, Jones-Griffin’s family, including her parents and sister, letter-boxed the community in the lead up to the first class.

The Shirlene School of Classical Ballet has now been in operation for 59 years. “We are now teaching the third generation of family members,” remarks Jones-Griffin. The school is a genuine family school, with many of the students she taught when they were three years old now returning with their own children or grandchildren. “Many have never left,” she says, with some students now in their 50s continuing their association by attending Pilates classes or watching their own children dance.
The key to Miss Jones’s (as the all the students call her) success is her absolute passion and love of dance. “I just love it – I always have,” she says. However, thrift and good management have also been the consolidating factors for the Shirlene School of Classical Ballet.

Jones-Griffin explains that she relocated the dance school to Anderson St in Pascoe Vale South when she bought a shop and converted it into a dance studio in 1962. Ten years later, when she’d paid off this first mortgage, the greengrocer shop next door to the studio went up for sale, so she bought that.

Then history repeated itself when the property next along went up for sale a further 10 years later, so she bought that and converted it into a residence. Finally, 40 years after her first purchase in Anderson Street, she bought the last property in the row and created a fourth dance studio. In 2005 she converted one of the dance studios into a 100-seat theatre, where the school’s annual performances and concerts are held over several nights.

Reflecting on her early teaching days, Jones-Griffin says, “I don’t know how we survived. We had no first aid training and no professional development. We had to work it all out for ourselves and find our own way.” Teachers back then had to work incredibly hard, she says, with resourcefulness and resilience. She herself achieved her Cecchetti Diploma in 1962 when she was examined by Dame Peggy Van Praagh and Laura Wilson. She remembers that it was quite an onerous solo exam of two-and-half hours, all on pointe. In order to gain her Cecchetti Diploma, Jones-Griffin studied under the late Madame Lucie Saranova, a direct pupil of the great Maestro Enrico Cecchetti.

Jones-Griffin performed in the semi-professional National Theatre Company in the 1950s and 1960s, becoming a principal soloist and performing up to four seasons a year, during the school holidays, with a daily matinee and night performance. “We did all the beautiful big ballets including Coppelia and Swan Lake. Working with Valrene Tweedie was a real highlight.”
Jones-Griffin had over 20 wonderful years dancing with her late, on-stage partner William Carse in shows and workshops. Her favourite time of the week, as a dancer? “Ballet class,” she replies. “I just loved it! My forte was pirouettes – I could do eight. I also loved allegro and batterie.”

Jones-Griffin’s teaching timetable is still full, though she has senior dancers who help out with class, particularly, she says “with the kinder kids and beginner children”. Her son, Clifford McGuinness, shares the school’s teaching load. She says that there are many more options for gifted young dancers today than there used to be, with the most talented going on to full time dance studies at either the Victorian College of the Arts or the Australian Ballet School. “I usually lose the most talented ones when they reach Year 7,” she says, though it is clear that she delights in their achievements.

She has received many accolades over her 62 year teaching career. The most recent is an Order of Australia awarded this year for services to the performing arts, particularly ballet. In addition to her school, Jones-Griffin served on the Cecchetti Ballet Administrative Council Australia in various capacities including vice-chairperson, joint-secretary and senior examiner from 1960 to 1991. She is a Fellow of Cecchetti International Classical Ballet and a life member and Fellow of the Imperial Society of Teachers of Dancing. She also received the James Esslemont Award in 2001 and a Bicentennial BHP Award in 1997.

The most joy she gets as a teacher is in witnessing the transformation of an uncoordinated child into graceful and coordinated dancer. “I say to parents, give them to me for 10 years, I can’t promise to make them a star, but they will be coordinated and graceful when I finish with them.”

Shirley’s advice to teachers is to be passionate about what you do: “Children can tell if you’re not!” She also advises teachers to teach every child – not just the most talented. “I know the name of every one of my students,” she notes. Her love of ballet is all about the movement and expression of dance, but “it is also about discipline and manners”. She explains that when students enter a ballet class, they enter a different world, a world where politeness and respect are all important and are central to the learning.

So what reward is befitting a teacher whose own passion and dedication has delivered the joy of dance to countless aspiring dancers? It would seem the love, respect and admiration of all these dancers and families, past and present, is the most enduring and truest form of reward for a teacher who has given so much. It’s your curtain call Miss Jones! Not the final curtain call of course! “I’m not ready to give it away yet! I’ve got so much more to contribute,” she says. Undoubtedly she does and her students are grateful for it! 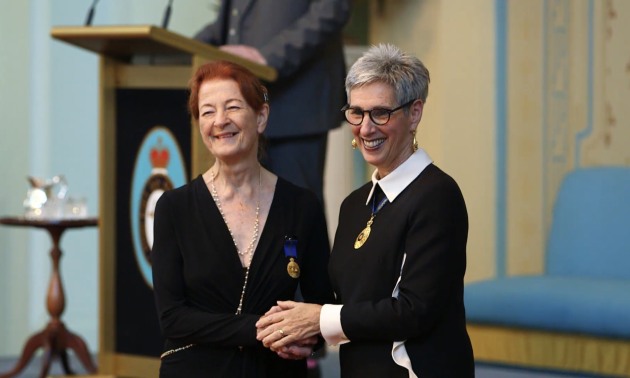 Jones being presented with her award from the Governor of Victoria, Linda Dessau, in 2018.