Dance will wait patiently for you to find it because it knows that is inevitable for those it has chosen. Here is how Sydney Dance Company dancer, Jacopo Grabar, found dance.

As a child, Jacopo was always dancing, although his home was his only stage. He even organised dance shows for his neighbours but there was no indication that dance would become his career. That is due to his mother’s patient persistence about his taking dance classes. Her first suggestion met a wall of resistance.

“I was a bit scared of it. I thought dance class was for girls,” Grabar recalls. Eventually, Jacopo’s mum convinced him with the lure of trying ballroom dancing. 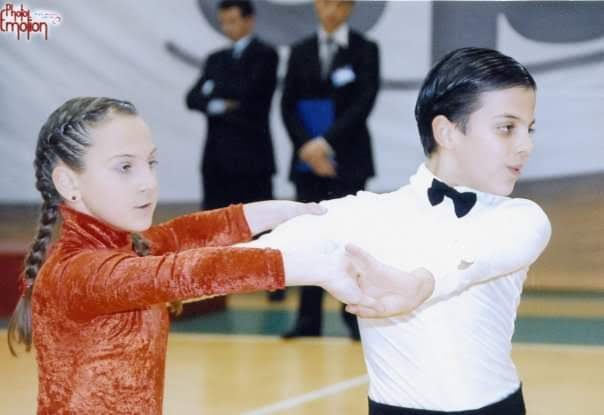 “There will be as many boys as girls,” she told him, “so you don’t have excuse not to.” Her instincts were good. “I really loved it,” Jacopo recalls, “and I never left.” Doing classes developed into doing competitions. Eventually he reached national championship level, becoming #1 in Northern Italy and #7 in Italy.

As he became more serious about dance, Grabar began to feel that ballroom was limiting. “I really liked modern dance and contemporary and I wanted to move on to that. Ballroom wasn’t leading anywhere,” he recalls. He began taking ballet and modern jazz classes at twelve.

“I fell in love with dancing even more and felt as though there was nothing more important on earth. It was then that Corrado Canulli, my first ever ballet teacher, whose school, Arteffetto Danza, I still go back to every time I am back home, approached me and asked me if I had ever thought of making dancing my profession. I still remember clearly how confused, yet excited I was. I told him I absolutely wanted to, and he devised a plan for me to increase my daily hours of study,” Grabar says. “I am incredibly grateful to Corrado and it is always a joy to take his class again when I am in Trieste.”

At the age of fourteen, Grabar started attending workshops around Italy to broaden my horizons, “and also to get to know (and get noticed by) the most famous dance teachers in Italy at the time,” he adds. During one of these workshops he was offered a scholarship for Ateneo della Danza.

“I received other scholarships,” he says, “but I chose that one because I liked its educational offer.” He moved to Siena from his home in Trieste by himself and embarked on a whole new world of schooling. “Our living arrangement was campus-like. I lived with other students and still attended normal high school, too. (In fact, I got both my science diploma and my dance diploma). There were many teachers who inspired me, and many who were not good at their jobs and scarred me and other students. The environment at Ateneo della Danza was unhealthy and, as in many other dance schools around the world, wrong. Unreal ideals were promoted, often discouraging students rather than motivating them. I only really understood what being a dancer means when I got my first contract abroad in Poland,” he notes.

In his last year with the school at seventeen Grabar auditioned for Balletto di Siena, the company connected to Ateneo della Danza, and received an apprenticeship. “The professional environment was extremely refreshing after all those years as a student. Moreover, starting to gain experience and fill up my CV at such an early age opened many doors throughout the following years.” It was here that Grabar had his first taste of being a professional dancer.

“My first professional performance was Lucifero, with Balletto di Siena. I was seventeen and wasn’t even an apprentice yet. Someone got injured and they needed a quick replacement, so I was quickly put in, and thrown on stage within one week. It was a great experience. Stressful, yes. But definitely worth it. Something shifts inside you when you realise that people are now paying to see you on stage. A bigger sense of responsibility. You know you need to deliver. You need to make sure that these people who bought a ticket to see you dancing leave the theatre with absolutely no regrets. And when you achieve that, it is extremely rewarding.”

He graduated to full-time dancer at the end of 2013.

The following year, Grabar moved to Poland to join the Baltic Dance Theatre in Gdańsk. “I describe Poland as my first real experience as a professional dancer. Balletto di Siena was my first contract, but it always felt as if I was isolated in the same bubble as my school. Moreover, working conditions as an artist in Italy are very poor and I was forced to take some side jobs to get to the end of the month. In Poland, I was working full time for an Opera House. I was lucky enough to work with and meet choreographers like Jiri Kilian and Patrick Delcroix and that enriched me in a way I can’t describe. I admired my colleagues and learnt from them. Every day was a tough challenge that made me grow quicker than ever before. I was finally a professional dancer,” he states.

He returned to Tuscany in 2015 to join ImPerfect Dancers Company in Pisa directed by Walter Matteini and Ina Broeckx and in August 2016 he joined Ballet des Stadttheater Bremerhaven, under the direction of Sergei Vanaev, where he worked with Itzik Galili and Ed Wubbe. Then he began to set his sights on the wider dance world.

“I’d always followed Sydney Dance Company and had reached a point in my career where I felt I was ready to try to approach it,” Grabar states. “I knew that the Company was coming to Germany on tour, so I wrote an email saying that I’d like to take class with them and see their show. I asked if they would they tell me which cities they would be in.” Sydney Dance Company asked him to send videos of his dancing and sent him some of theirs so that he could learn some repertoire.

Grabar has danced in all of Sydney Dance Company’s seasons since then, including its world tour in 2019. After Covid abruptly stopped the 2020 season a week before its opening, Grabar also began teaching for the Sydney Dance Company Studios, ballet as well as body conditioning classes.

Why does Grabar dance? “I just love being able to use my body, especially to express emotion. And I love music. I love being able to represent music with my body. I was also very lucky to get contracts. It’s very hard to be a professional in the arts world. I’ve just kept going.”