This year’s OzAsia Festival was much diminished on account of Covid-19, with a reduced program overall and several productions cancelled at the last minute, among them Sue Healey’s much-anticipated The Long Walk, which was to be live-streamed from the beach at Robe. The final dance program consisted of the two works reviewed here, both of which were relatively small-scale two-handers.

Somewhere, Everywhere, Nowhere, jointly created, directed and performed by Alison Currie and Yui Kawaguchi, a Japanese artist based in Berlin, explores the contemporary paradox of a human existence that is at once digitally connected and yet immensely isolated. It begins with Kawaguchi crouching on a sloping platform stage right, dressed casually in bright red pants, green top and trainers. On stage left a tangled mass of cables hangs from the flies in semi-darkness. As Kawaguchi slowly comes to a standing position, her upper body swivels rigidly and she wobbles, her balance precarious. Using her feet, she gradually separates the platform into two, revealing Alison Currie, clad in mustard coloured top and blue trousers, crouching within the wedge-shaped form of the other platform.

A duet ensues in which the two dancers mirror each other’s movements from a distance, extending and somersaulting their bodies in their respective cramped spaces. When Kawaguchi steps across to stand above Currie on top of her platform, their mirrored movement in proximity evokes images of lockdown, when we were confined to our homes yet weirdly unable to have contact with our neighbours. A long sequence of backward walks in straight lines, to the gurgling and shunting sounds of Sascha Budimski’s soundscape, is followed by a repetitive step-ball-change motif with equally repetitive arm movements. A more dynamic section follows, in which fleeting connections are made only to be disrupted.

The work ends with the dancers tangled in the mass of fibre optic cables, now lit in pulsating colour, while bombarded with recorded voices asking questions about mental health. This is a powerful ending signifying our reliance on digital connections that also paradoxically disconnect us: however, the movement elements are not compelling enough, and this conceptually strong work would benefit from further development. 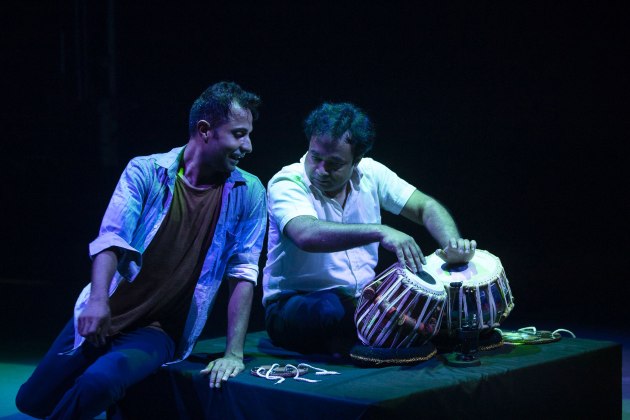 Two is a more light-hearted piece predicated on the distinct roles of dancer and drummer in the Indian Kathak dance tradition. Dressed in practice clothes, choreographer and dancer Raghav Handa is warming up as we are seated, and it feels like ages before the work actually commences with the entrance of the tabla player, Maharshi Raval, who explains that he’s late because he couldn’t find a park. This sets the scene and the tone: we are witnessing a practice session in which the two will jostle for dominance, using dialogue, dance and music to stakes their claims.

The traditional authority of the tabla player, who sets the rhythm and phasing that the dancer responds to, prevails, but is occasionally undercut by Handa’s mischievous incursions. For instance, when Raval leaves the room to check on his park, Handa surreptitiously touches the top of his drum, an act traditionally forbidden. Equally, when Raval accepts Handa’s invitation to dance with him, we learn that this is a transgression.

The interplay between the two is understated yet charming, and Raval’s superb tabla playing is matched by Handa’s mercurial dancing, which, although incorporating the dynamic suddenness of Kathak’s upper body movements, abandons its intricate footwork in favour of more expansive contemporary movements. This is a truly delightful work that deserves a wider showing.

Looking for a Christmas present? Take advantage of our special subscription offer here!