“Arkiteknicians explores the concept of how a space, a sound, an event or an image can be experienced and resonate differently for all of us,” according to the program notes for this new production by Locreado Dance Company. This means that if Arkiteknicians succeeds; if its choreographer and creative director, Vi Lam, and assistant choreographer, Millie Slennett succeed – and they are sure to – the professional performance is a triumph – you will see something different in it than I did.

What is undeniable, unignorable, empowering in the performance is the majesty of feminine strength and confidence. This was hinted in Locreado’s pro performance earlier this year. This time, it was palpable (even though I was watching the dress rehearsal.) It was embedded first in its striking ensemble of strong female bodies. Chima Olujie’s body demanding, “Look at me.” Millie Slennett’s saying, “Don’t care if you don’t.” Jahni Clarke’s saying, “My sexuality is my power.” Sophia Kaloudis’ knowing “I have your attention.” At two points in the performance set against Lam’s innate gracefulness and harmonising with his confidence and strength.

It was underlined by Lam’s choreography, a journey of imagination told in movements of incredible strength and subtle sensuality – sometimes one, sometimes the other, sometimes both (this latter remarkable).

And it was underscored by its music. That music deserves its own applause. Hand-picked by Lam. A driving drum beat. An energetic albeit lyrical interlude. A powerful anthem. Every now and then, a little of both. Every piece enhancing what was “undeniable, unignorable, empowering in the performance – the majesty of feminine strength and confidence” and its story of the journey of imagination that moves like an amoeba into different spaces and into different moods, each of which is unique.

Loredo Malcolm and Vi Lam’s dream of creating a professional company that nurtures the next generation of professionals and makes an impact on the dance world has taken another giant leap forward this year. And that has occurred despite a four-month lockdown in Sydney, which began shortly after the company's first 2021 performance.

That performance triggered a great deal of interest and a new vision for the company – to become a company that underlines and supports diversity. Lam explains: “Loredo and I are immigrants. We came here for a better life, a better opportunity to do and now we're doing it. Now, we have a platform, we have an audience and have artists who want to work with us.” Locreado has grown to a corps of nine professionals following an audition that called for culturally diverse artists and it ran two training courses in the second half of 2021 following a surge in applications. Its new production, which is being hosted by Sydney Dance Company, is running over four nights – two professionals only and two professionals plus students. It sold out in just a couple of weeks.

Vi’s second professional production is influenced by reactions to his first, which he choreographed and directed under Malcolm’s guidance for the show earlier this year. “I was fascinated by the different ways in which my first choreography was interpreted,” he says. “I wanted this one to be open to interpretation too.” The choreography developed over the rehearsal process. “Choreography is a very instinctive and immersive process for me. It has always been that way because I trained under Loredo. He is a phenomenal dancer and artist and he works that way,” Lam adds.

The idea came from an idle day in London. “I ended up spending seven hours day at the museum, something I wouldn’t normally do. I wandered around without an itinerary or purpose, staring into pictures that I have no association with. There were no rules. I found myself following people and wondering what they were doing. It triggered my imagination. I worked off the idea of how that very simple activity was so profound for me, in a place where everyone can exist without conflict and without politics, and where it doesn’t matter for the experience what language you speak.”

“My aim, my passion is to give these young dancers a platform to show off what they can do, to give them an opportunity to flourish,” Malcolm says. Mission accomplished. Magnificently. 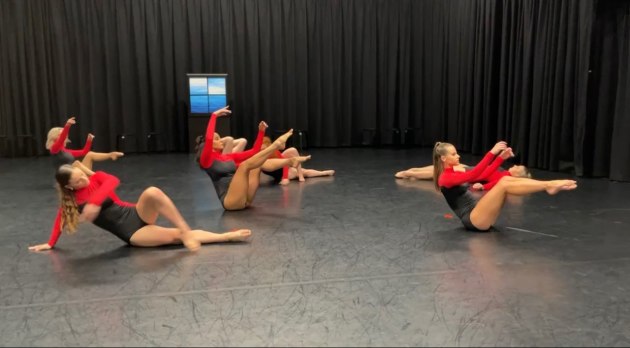