The trio are founding members of Dance Makers Collective (DMC), a group of ten young choreographers that has been in operation for about a year.

Nina Levy caught up with Carl Sciberras to find out about more about DMC and the upcoming double bill.

DMC’s first season, “Big Dance in Small Chunks” - a mixed bill of short new works, got the collective off to a flying start last October, says Sciberras.  “We had a hugely successful premiere season last year that we're super proud of - the industry was incredibly supportive, audiences loved it and we had some really positive reviews which was more than we could have hoped for.”

Since then it’s been all about planning, continues Sciberras.  “We’ve been lucky enough to receive a Jump mentorship grant from the Australia Council for the Arts, with Michelle Silby (Director of Ausdance NSW) as our mentor, and the mentorship has been about building a framework for the collective to work within to make our future projects even better than the first. We're presenting a little project at the end of this year which is still in the making and will appear in the digital form rather than live performance, and we've been planning our next big live performance which will be developed throughout 2015 and presented in early 2016.  So basically, it's been a lot of meeting, pow wows and plans, we're still very active and super excited about working together into the future.”

Whilst preparations and plans are being made for DMC’s next shows, the collective is supporting Sciberras, Cornell and Wheen’s double bill, which runs at Parramatta’s Riverside Theatres 11-13 September.  Sciberras, together with collaborator Todd Fuller, will be presenting Sketch, alongside Between Two and Zero, by Cornell and Wheen.  “Sketch involves three dancers, a live visual artist (Fuller) and live sound artist (Mitchell Mollison), and it explores real-time negotiations between these three artforms,” says Sciberras.  “It’s highly structured and choreographed, but within a structure all three artforms play, improvise and respond actively to one another.  There is no narrative; the work forges an energetic arc.  It's created around three specific tools of drawing that are projected into the space.  The dancers are a canvas in many ways, and also impetus for the generation of visual art and sound, and there is also a really rich dialogue between the art and the sound, and the sound and the dance.”

You can catch Sketch and Between Two and Zero, presented by Form Dance Projects, at the Lennox Theatre, Riverside Theatres, Parramatta between 11 and 13 September.  More info/bookings: www.riversideparramatta.com.au 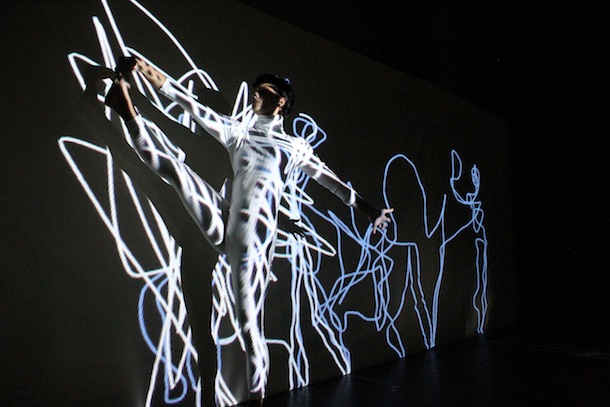