The esteemed teacher Gailene Stock has died in London, aged sixty-eight, as the result of a brain tumour.

Stock’s life was one that was marked by unusual detemination and strength, but this last illness was a battle that she could not win.

Born in Melbourne, Stock became a dancer despite having been struck down with severe case of polio at the age of eight – for nearly two years she lay immobilised on her back in a full-body-length metal cage. Despite predictions she would not walk again, she eventually recovered, beginning with painful stretching exercises, walking on all fours and eventually standing. She was finally back in class at the age of 14, four years from when she first became ill. This recovery alone was remarkable enough. Two years later a truck full of gravel hit the car her father was driving. Her skull was fractured and her jaw was broken, and she was in a coma for three days, but she still attended her ballet exam 14 weeks later. And received a highly commended.

At age 16 she was offered a place in the Australian Ballet, but after a short time in the company she took herself off, alone, to accept a year-long scholarship to the Royal Ballet School in London.

Although she was almost guaranteed a place in the Royal Ballet, she left the school before the completion of her scholarship and joined the Grand Ballet Classique de France and then the Teatro dell’Balletto di Roma. She then returned to Australia and the Australian Ballet, where she danced for seven years as a principal dancer, and where she met her soon-to-be husband, fellow principal Gary Norman. They both went on to perform as leading dancers with the National Ballet of Canada and Royal Winnipeg Ballet. Their daughter, Lisa, was born in 1978.

Stock’s entrepreneural gift raised not just the standards of the Australian Ballet School but also its public profile. Her vigorous leadership at the Royal Ballet School rejuvenated that school to its former glory, raising the graduate employment rate from below 50% to 100 per cent. She has been a major force in teaching standards in both Australia and the UK.

She will be sorely missed.

See our longer article in the June/July issue of Dance Australia, together with tributes from her friends and colleagues.

We invite you to leave your own tributes in the comments section on this page. 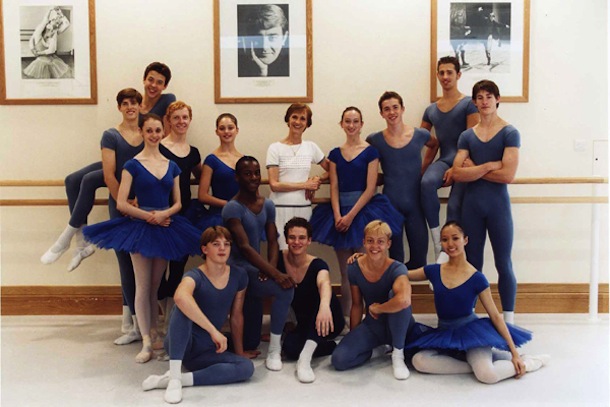 Above:  Stock with students from the Royal Ballet School.