One of the Marshall government’s first acts when it was elected in South Australia in 2018 was to effectively dismantle Arts South Australia and to disperse its responsibilities to other departments. Arts funding was cut by $4.9 million in 2018-19, with further cuts of $31.9 million forecast over the next four years.

Given this context, there was relief across the arts sector when Premier Marshall announced an arts review—the first since 2000—led by respected arts bureaucrat Tony Grybowski, leading to the formulation of an Arts Plan for the State.

Artists and arts organisations enthusiastically prepared submissions and attended forums to express their views on how the arts should best be supported and developed. In April the SA independent dance sector urgently met to discuss its views (as the sector had not been consulted), which formed the basis of its submission, Let Them Hear: the South Australia Independent Dance Sector Report 2019, co-written by Dr Cathy Adamek from AusDance SA and Amanda Phillips from Dance Hub SA, in consultation with over 30 representatives from the sector.

Let The Hear made 10 major recommendations. They included the creation of umbrella structures for co-operative shared spaces in which independents can create work; an increased funding pool for dance; a requirement that all state-funded festivals spend a percentage of their moneys on investing in SA based dance/theatre works; and the provision of incentives for artists, artist stipends and an artist register, based on the models used in France and Belgium.

The report also outlines the need for global alignment and cultural leadership in supporting artists through residency programs and the like. Importantly the sector argued for dance funding to be more fairly distributed, with independents having as equal access to resources as major companies. The report also recommends the reinstation of quick response grants, with more grants to mid-career and established artists.

Regrettably, these recommendations appear to have fallen on deaf ears. Big on aspirational statements, but light on detail, the recently released Arts Plan 2019-24 makes no promises to restore funding to pre-2018 levels, let alone to increase it. Indeed, almost all funding decisions have been deferred to the 2021 budget. The exceptions are the Indigenous Arts sector, the Adelaide Festival, and the promise of some generic Creative Fellowships, but how many and at what level they will be funded is not stated. Dance barely rates a mention.

When we meet to discuss the state of the independent dance sector, Amanda Phillips says diplomatically that she hopes the Plan is ‘just the beginning of a conversation about arts funding as there will be the need for ongoing review to sustain the health of the arts. Investment is needed to charter any industry’. As a long-standing independent dance maker, co-director of Felicity Arts, and now as Artistic Director of Dance Hub SA, Phillips knows better than most what is needed to make dance flourish in the state. Since starting work as Curator, later becoming Artistic Director, of the LWDance Hub in 2017, she has being working hard to extend support to independent dance artists. With Leigh Warren stepping away to pursue his career as a Visiting Professor of Dance at Taipei National University of the Arts in Taiwan, the Hub was re-branded Dance Hub SA this August.

The Hub's situation is indicative of the pressures of insufficient and unpredictable funding . .

Phillips points out that while other SA organisations such as ADT, Restless Dance Theatre, The Mill and Vitalstatistix all support the local dance ecology in various ways, Dance Hub SA is the only organisation in the state with the needs of the independent dance sector as its core focus. Clearly the Hub fulfils a vital role, but its situation is indicative of the pressures of insufficient and unpredictable funding felt right across the sector. The loft it occupies in the Lion Arts Centre in Adelaide’s CBD (which is provided rent-free by the SA government) is only available 26 weeks of the year because it is shared with the State Theatre Company. State government funding is provided on an annual basis, with no guarantee that it will be matched or even forthcoming at all in subsequent years. This year’s funding of around $100,000 pays for staff salaries as well as all the Hub’s projects, hence is stretched very thin. Phillips, for example, is only paid for 12 hours work per week, and devotes much voluntary time to getting projects up and running.

In light of this, the scope and ambition of the Hub’s projects are impressive. Based on the models of Chisenhale Dance Space (UK), Tanzhaus Zurich, ImpulsTanz Festival (Germany) and the Taipei Artist Village, a suite of interrelated programs aims to nurture dance makers from graduation through to professional practice. This year it launched the Asia-Connect exchange by hosting Chien-wei Wu from Taiwan’s Tussock Dance Theatre, and in 2020 it will send a South Australian artist to the Asia-Pacific Contemporary Dance Platform for two weeks.

In the Associate Artist program, SA-based choreographers are appointed to further develop their careers. This year’s artists, Lewis Major, Erin Fowler and Cathy Adamek, will work on their own projects as well as acting as mentors to selected candidates in the Artists in Residence program. The latter program offers local dance makers short residencies with studio time to create and opportunities for studio showings of their work. Choreographic mentorship is made available through the Young Artists Program that provides intensive workshops and presentation opportunities to neophyte and emerging choreographers – this year mentored by Amanda Phillips and next year mentored by Alison Currie.

The Hub also collaborates with Tasdance on the Mind the Gap residency, in which both organisations host an interstate artist in order to facilitate national career building, new collaborations and networking opportunities. Another initiative is rather mysteriously called just ‘X’, a program devoted to collaboration between composers and choreographers, with a particular emphasis on improvisation. Finally, Dance.Focus is run in partnership with Ausdance SA to support choreographers working in the digital and film space to produce a dance film or moving image work for presentation in the South Australian Living Artists Festival.

Formal training in choreography is non-existent at a post-graduate level in South Australia, which makes the work of the Hub and other initiatives such as ADT’s Choreographic Centre so vital to the local dance ecology. That the Hub is expected to do so much to develop choreography on so little is troubling though: $100,000 in the context of an overall state arts budget of close to $100 million is peanuts in anyone’s eyes. Given that roughly 150 individuals work in the independent dance scene, Phillips’s statements that “the demand for our residency program outweighs the part-time supply” and “the needs of the independent dance sector urgently need to be catered for” are beyond dispute.

Despite all the uncertainties and difficulties, however, she remains upbeat about the Hub’s role: “It would be a dream for independent dance to be supported in a robust way, with more studio time for creativity, but we are making headway at the Dance Hub and it feels like it is a home -- Adelaide's home of independent dance. Wherever our SA artists travel to in the world, Dance Hub SA is called “home” on their return. The artists keep knocking. We need to be forward-thinking and we need a 24/7 studio for dance. I’m imagining that future and the possibility of dance and choreographic diversity in Australia.’

Pictured below: Stephanie Lake takes a workshop at The Hub. 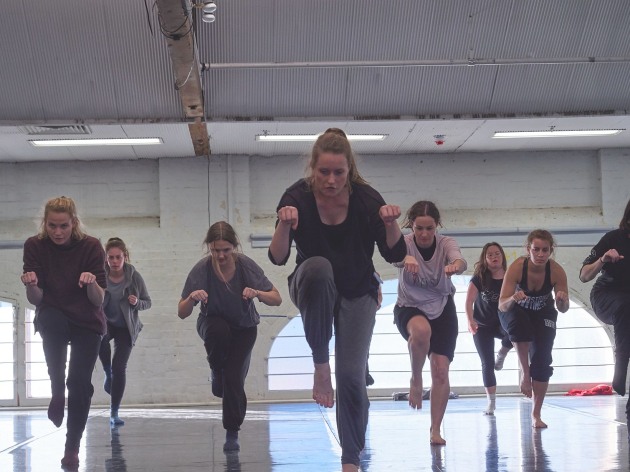