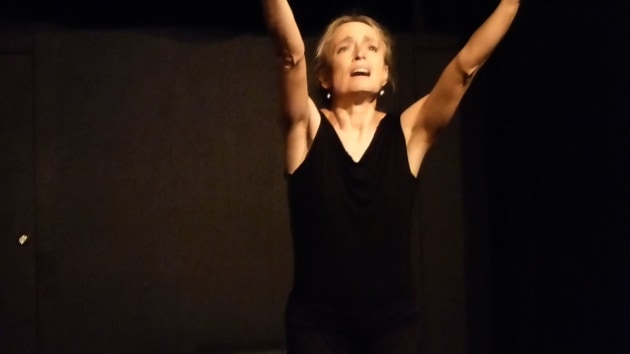 Irina Kuzminsky, Dance Australia's respected classical ballet critic, is staging her own "one woman dance and poetry fusion show" at the Butterfly Club in Melbourne.

Called Coming Through, Kuzminksy describes it as a  journey through loss and grief – and of coming through – into the light. Kuzminsky has written and choreographed  the work to her own original musical settings of her poetry. "This is a piece of classical performance art, integrating dance movement and sung and spoken word," she explains.

Coming Through builds on her first one woman show, Dancing with Dark Goddesses, itself triggered by the publication of Irina’s first poetry collection by Awen in the UK, and seen in the UK, NY, Germany and here in Melbourne.

Drawing on all her skills and training, Kuzminsky is continuing in the work begun in her doctoral thesis at Oxford on the "language of women", as she embodies the space opened by poetry and allows the words to dance. The "language of women" has increasingly become her life’s work – from rediscovering the women of the past and giving them a new voice, to writing and creating her own art as a woman seeking her voice.

Much of her artistic expression has also become fully entangled with a developing sense of women's spirituality and of the sacred feminine. Her current work, bringing words, voice, music and dance together, is part of that, creating a sense of feminine ritual and sacred space through a woman's telling of her experience of life and of the sacred.

Kuzminsky (aka Irinushka) is a multi-talented artist who combines classical music and dance training with an academic background with degrees from Melbourne and a scholarship to Oxford. Her performances in Australia and overseas run the gamut from recitals and multidisciplinary work to dance and dance theatre. She has had several poetry collections published (most recently Artists and Lovers, Coventry Press 2018), and had her work included in two international anthologies, alongside articles, reviews and poems in publications such as the Esoteric Quarterly, Dance Australia, Acumen and others. She has written recently on Kali the Dark Goddess and on Mary Magdalene, both subjects she is passionate about.
Irinushka's work with performing her poetry has led to the release of three albums of her poems set to music, with Roads Travelled attracting favourable reviews and reaching #46 on the Zone Music Reporter charts for New Age music.

Coming Through opens on October 21 and runs for 5 performances.
Bookings: https://thebutterflyclub.com/show/coming-through