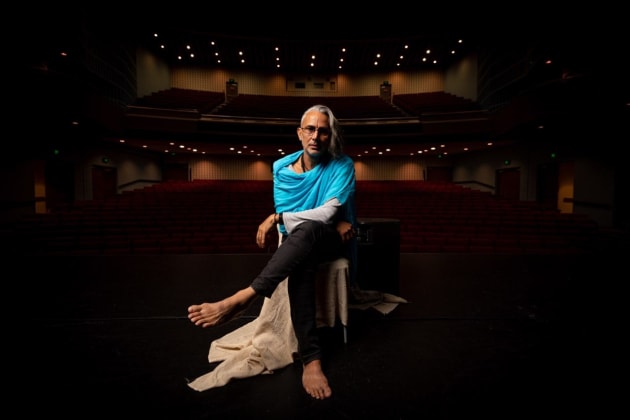 Larrakia man Gary Lang loves to tell the story of the time when the internationally famous (late) ballerina, Lucette Aldous, came into the room where he was rehearsing. After watching for a while, she said to him: ‘Gary, your work isn’t contemporary Aboriginal dance, it’s Aboriginal ballet.’ ­”

It's a description he has embraced with pride. "I love the aesthetics of classical ballet," he says, joking that he's "a bit of a bunhead". Now the director of his own Northern Territory Dance Company in Darwin, he is adamant that as a choreographer and creator he is pursuing his own aesthetic and vision, which is not confined to Indigenous culture. His own background, as he points out, is a mix of Scots, Larrakia and Filipino. "One of the fore things I say, I will work with anyone who wants to tell my story, black, white or brindle. [The company] is not all Indigenous, it's Indigenous owned, but I'll work with anyone who wants to tell my story. And share that culture with them too.”

He is about to share one of his biggest projects to date at the Darwin Festival in August. Called Wanja (the middle letter is actually a merging of n and j), this is a work that brings together professional contemporary dancers, drawn locally and from interstate, the local MIKU Performing Arts (Yirrkala) company and a string quartet from the Darwin Symphony Orchestra playing the music of Philip Glass. The rehearsal director is Christopher Hill, currently marketing and project director at Strut Dance in Perth.

Wanja means spirit. The work evolved out of the earlier Mokuy (2014), Lang’s response to young lives lost in Indigenous communities, but it is also broadly about the passage from life to death, and shaped in part by Lang’s experience of the deaths of his beloved mother and grandmother. These women, he says, were the people who helped him most in life but also in understanding death, in his own words, “about the journey of the soul through the in-between world before we go into the 'wonderment'."

Born in Darwin, Lang is a NAISDA and Bangarra alumnus. He was in the second cast of the landmark Stephen Page creation, Ochres, which the company took on a world tour. He was also in Dancenorth in Townsville when under the direction of Jane Pirani. In 2013, he received an Australia Council for the Arts’ Dance Board Fellowship – a prestigious $100,000, two-year grant. Lang seized the opportunity to collaborate with communities in the NT and elsewhere, such as the Indigenous Ochres company in Perth, as well as develop his own creative potential. Eventually, irritated that there were so few Indigenous dance companies in Australia, he took up the challenge to start his own.

NT Dance Company has evolved over time, from project to project, and is now resident company at the Darwin Entertainment Centre. The company artists come from a variety of backgrounds and represents the rich multicultural essence of Darwin.

Lang’s choreographic works include Munuk Gapu – Fresh water Salt water (2008), inspired by the Territory pearl divers from a bygone era, and Milngia, Milky Way — River of Stars, commissioned by the artistic director Aurelien Scannella for the West Australian Ballet in 2018. This brought the classical dancers of the company together with three dancers from the NTDC and traditional cultural artists from Yirrkala: songman Banula Marika, Yidaki player Malngay Yunupingu, dancers Ngalkanbuy Yunupingu and Loretta Yunupingu and opera singer Deborah Cheetham, all to the magnificent Symphony of Sorrowful Songs by Henryk Gorecki. It is an example of the collaborative, eclectic, culturally embracing nature of Lang's choreography. Another is Inspired (2016), which grew out of Lang’s obsession with Tchaikovsky’s music.

"Why does a blackfella have to play blackfella music?" he asks. "Being a black person, there's always an expectation that you are going to work with Indigenous toned music. I love it, it has its place, but I love classical music. It resonates within myself.”

Lang's choreography is often described as "lyrical" but he prefers the description "breath". "It's breath; it's the spirit of the world," he says. "Some people say my work can look quite sensual, but the earth is sensual - see how the leaves are moving in a soft breeze, or feel the sun touching your face on a cold day, sit by the water as it laps up on you - the earth ‘breathes’."

Wanja is however, still rooted in traditional dance, drawing on the songlines (manikay) and funeral rites of the Yolnu People of Arnhem land. “People call it ceremony, but the traditional music and dance is helping the soul move into the next world,” he explains.

“We are all energy,” he goes on. “As an artform, dancers, artists, they resonate spirit, not just physical bodies.”

'Wanja' will be 5 & 6 August at the Playhouse, Darwin Entertainment Centre.

Other dance acts at the Festival are Raghav Handa with ‘Two” and the Australian Ballet with a regional tour Ballet Gala. for the full program, go here.